Igbo is a southeastern Nigerian ethnic group. Igbo is the language spoken by the people of Igbo territory, which encompasses a variety of Igboid languages and dialects. The Igbo ethnicity is one of the populous ethnicity in Africa. Igbo people are predominantly craftspeople, farmers, and traders in rural Nigeria.

The Yam is the most significant crop in the Igbo nation, and harvest celebrations are celebrated every year.

Cassava and taro are two other main crops.

Men wear cotton wrap (robe), a shirt, and sandals daily. They wear a long shirt with tucks and embroidery over a stylish wrap, shoes, and a cap for formal events.

The Igbo’s major diet is the yam. The yam was traditionally the food of choice for ceremonial events. Rice has mostly overtaken it in recent years. Cassava, taro root, maize, and plantains are examples of starchy foods.

A typical meal consists of a starch and a vegetable-based soup or stew to which fish, chicken, beef, or goat meat is added. Various forms of jollof rice are popular throughout Nigeria. It is frequently cooked with shrimp among the Igbo who live near waterways. 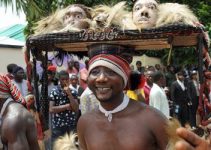