Following recent reviews, it has been found out that the weaknesses of candidates in WAEC Physics questions included lack of understanding of the fundamentals of the course,

inability to take precise measurement to required accuracy, inability to plot graphs correctly and disregard of instruction, which makes them loose marks.

In this post, we will be posting out samples of the waec physics questions for candidates that will participate in the examination from past questions. we will update when the main questions and answers for 2020 early before the exam time. WAEC PHYSICS ANSWERS DROPPED.

join our group chat or allow notifications so you get the correct one when it drops.

2. (a) Explain what is meant by cations.
(b) Draw and label an electrolytic cell.
ANS: (a) Cations – are positive ions that are attracted to the cathode (during electrolysis)

4. (a) State Faraday’s second law of electrolysis.
(b) An electric charge of 9.6 x 104 C liberates 1 mole of substance containing 6.0 x 1023 atoms. Determine the value of the electronic charge.
ANS: (a) The mass of an element deposited /liberated during electrolysis is (directly) proportional to the chemical equivalent of the element.

5. Explain the following terms:
(a) tensile stress;
(b) Young’s modulus.

6. (a) Define diffusion.
(b) State two applications of electrical conduction through gases.
ANS: (a) Diffusion is the process by which substances mix with one another due to the random motion of their molecules.
(b) Applications of electrical conduction through gases include:
– In advertising industry/ Neon signs
– In lighting/ fluorescent tubes
– Identification of gases
– Cathode ray oscilloscope/ T.V. tubes.

8. Give three observations in support of de Broglie’s assumption that moving particles behave like waves.

9. (a) Differentiate between plane polarization and interference as applied to waves.
(b) List two uses of polaroids.
ANS: (b) They are used in:
– production of 3-dimentional films
– determination of concentration of sugar solution
– polaroid cameras
– sun glasses. 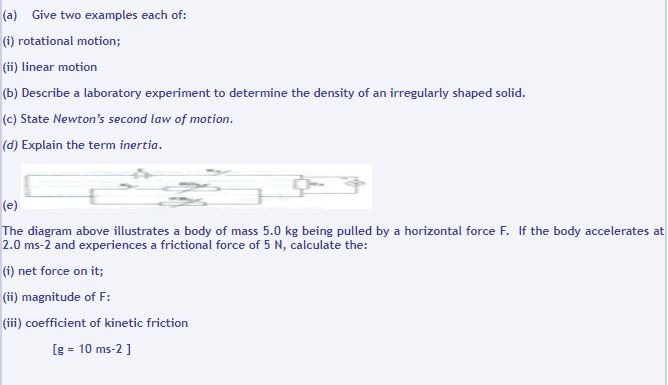 12. (a) i. State two advantages of alcohol over mercury as a thermometric liquid.
ii. When the bulb of a thermometer is placed in a beaker of hot water, the level of mercury first falls and then rises gradually. Explain this observation.

(b) List two factors, other than temperature, that affect the rate of evaporation of a liquid.
(c) A block of lead of mass 100kg in a crucible and at a temperature of 40oC was placed in an electric furnace rated 10kW. If the melting point of lead is 320oC, calculate the:
(i) quantity of heat required to heat the lead to its melting point;
(ii) additional heat energy required to melt the lead;
(iii) time taken to supply this additional energy.
(Specific heat capacity of lead = 120JKg-1 K-1
(Specific latent heat of fusion of lead = 2.5 x 104 JK-1)
(d) State two precautions necessary in an experiment to determine the specific latent heat of vaporization of water.

ANS: (a) i. Advantages of alcohol over mercury as a thermometric liquid
– lower freezing point
– cheaper
– easily expansively.
ii. the glass of the bulb of the thermometer first expands; hence the mercury level fails. The expansion of the mercury increases more than that of the glass and the liquid rises.

(b) Factors other than temperature affecting the rate of evaporation of a liquid
– wind
– humidity/ dryness of air
– nature of liquid/ viscosity /density
– area of liquid exposed
– pressure.

13. (a) State two factors which affect the angle of deviation of a ray of light through a triangular glass prism.
(b) Seven virtual images of an object are formed when two plane mirrors are inclined at an angle 0 to each other. Calculate the value of 0.
(c) By means of a ripple tank, a student was able to generate series of transverse waves by varying the frequency ofthe dipper and all the waves so generated covered a distance of 0.80 m in 0.2 s.
(i) Determine the speed, v, of the waves
(ii) Copy and complete the table given above in your answer booklet.
(iii) Plot a graph with f on the vertical axis and h -1 on the horizontal axis.
(iv) What does the slope of the graph represent?

14. The Fig. 5.1 below shows a ray of light entering and passing along an optical fibre. 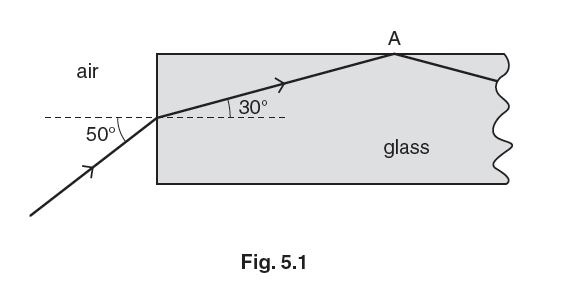 15. (a) State two differences between a sound wave and a radio wave
(b) Explain why a vibrating tuning fork sounds louder when its stem is pressed against a table top than when held in air.
(c) State two conditions necessary for the:
i. production of stationary wave in a medium;
ii. formation of interference wave patterns;
iii. occurrence of total internal reflection of a wave.
(d) i. A ray of light is incident on one face of an equilateral glass prism.Draw a ray diagram to show the path of the ray through the prism.
ii. Calculate the refractive index of the glass if the angle of minimum deviation is 41o.

WAEC Physics Objective Questions 2020:
Paper 1 [Objective]
Answer ALL questions in this section.
Shade your answers on the answer booklet provided.

3. A metallic bar 50 cm long has a uniform cross-sectional area of 4.0 cm2. If a tensile force of 35kN produces an extension of 0.25 mm, calculate the value of Young’s modulus.

4. A stone projected horizontally from the top of a tower with a speed of 4 ms-1 lands on the level ground at a horizontal distance of 25 m from the foot of the tower. Calculate the height of the tower.
[g = 10 ms-2]

5. A spiral spring with a metal extends by 10.5cm in air. When the metal is fully in water, the spring extends by 6.8 cm. Calculate the relative density of the metal (Assume Hooke s law Is obeyed)

6. A ray of light is incident on an air-glass boundary at an angle t? If the angle between the partial reflected ray and the refracted ray is 90°, calculate θ given that the refractive index of glass is 1.50.

7. A ball is projected horizontally from a height with a velocity of 40 ms-1. Calculate the drop in height after travelling a horizontal distance of 30m.
[Neglect air resistance; g = 10 ms-1]