In this post, we will be giving out the samples of waec economics questions for candidates that will participate in the examination from past questions.

1. The following data shows the budget of a hypothetical country in 2006. Use the information in the table to answer the questions that follow:

(a) What is the country’s total population?
(b) Calculate:
(i) the ratio of population under 18 to population over 60 years;
(ii) the dependency ratio.
(c) What percentage of the population constitutes the labour force?
(d) Explain whether the population is growing or declining. 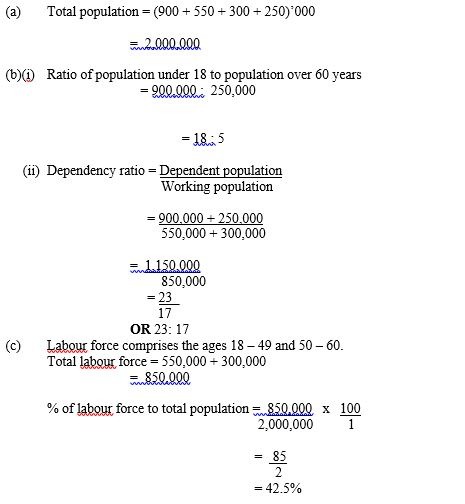 2. A village consists of twenty (20) households with the following annual incomes:

3. (a) Why is scarcity a fundamental problem in Economics?
(b) Give a reason why Economics is a;
(i) Science;
(ii) Social Science.

ANS: (a) Economics seeks to study the relationship between ends and means. Ends are unlimited while the means are limited. Scarcity means resources are limited in relation to the ends. Economics is therefore concerned with allocating the limited resources among the competing and unlimited wants.
(b) (i) Economics is a science because it adopts the scientific method.
(ii) Economics is a social science because it studies human behaviour. e.g. If the price of a commodity rises, people will buy less, other things equal.

4. (a) Outline the chain of distribution for  manufactured  consumer goods.
(b) Explain the functions of the
(i) wholesaler;
(ii) retailer.

5. (a) Define labour.
(b) Give four factors that affect the efficiency of labour in your country.

ANS: (b) (i) Education and Training:  All  kinds of labour require training which may include formal training, training on the job.
(ii) Availability of equipment and tools: Labour efficiency also depends on the equipment and tools available to workers.
(iii) Physical Environment: The  environment in which labour works helps to determine its efficiency as well as its productivity e.g. harsh physical environment.
(iv) Human environment – conducive management style will increase labour efficiency.

7. (a) With the aid of a diagram, explain a minimum price.
(b) State any five measures by which a minimum price for an agricultural  produce can be made effective.

9. (a) With examples, distinguish between  direct and indirect tax.
(b) Explain any four problems of tax collection in any West African Country.

10. (a) What is demographic transition theory ?
(b) Explain the three stages of the theory.

11. (a) Differentiate between shares and debentures.
(b) Identify any four problems encountered by farmers in raising capital

ANS: (a) A share is the smallest unit into which the capital of a company is divided. It is a unit of ownership of a business concern while a debenture is a loan capital or corporate bond. A debenture holder is a creditor to a company.
(b) (i) low level of loanable funds;
(ii) inability of firms to produce the required collateral facilities;
(iii) under-developed money and capital markets;
(iv) high cost of loans;
(v) fluctuation of share prices;
(vi) Government financial regulation.