NOTE: THIS IS NOT THE 2020 WAEC AGRICULTURE QUESTIONS AND ANSWERS,

1. (a) Differentiate between land ownership by leasehold and land ownership by freehold.
(b) Mention five ways in which non-governmental organizations contribute to agricultural development in West Africa.
(c) State four ways in which rural-urban migration has hindered agricultural development in West Africa.
(d) Mention three socio-economic uses of land.
(e) Explain two ways by which each of the following environmental factors affect agricultural production: i. soil organisms; ii. soil texture.

ANS: (a) Leasehold involves the payment of fees for land used over a stated period of time under
agreed specified conditions WHILE freehold is the outright purchase of land (permanent ownership)

2. (a) (i) Distinguish between straight fertilizers and compound fertilizers.
(ii) Give four examples of inorganic fertilizers.
(b) List three biotic and three climatic factors that influence agricultural production in West Africa.
(c) State four ways by which the carbon cycle is important in agriculture.

3. (a) Explain the term soil.
(b) List four characteristics of loamy soil.
(c) (i) Draw an annotated diagram of the water cycle.
(ii)  List the three types of soil water.

4. (a) Explain each of the following terms as used in crop production:
(i) grafting;
(ii) thinning;
(iii) staking.
(b) State two reasons for adopting each of the crop production activities listed in 4(a).
(c) Mention the botanical names of two species of yam.
(d) State two uses of ginger.

5. (a) (i)  Explain the terms line breeding and inbreeding as used in animal improvement.
(ii) State three advantages and three disadvantages of inbreeding.
(b) State four factors that determine the amount of water required by farm animals.
(c) Give four sources of calcium in the diet of livestock.

6. (a) State three characteristics of each of the following classes of animal feedstuffs;
(i) roughage;
(ii) basal feeds;
(iii) concentrates.
(b) Enumerate four factors that should be considered in selecting a site for the construction of a fish pond.
(c) State three preventive and control measures of diseases in farm animals.

(1) A farmer has a large piece of land on which he grows wheat year after year.
What is the name for this type of farming?
A crop rotation
B mixed farming
C monoculture
D organic farming 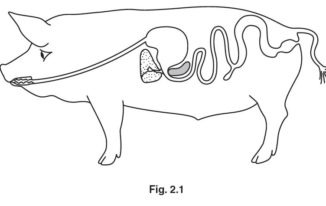 Keep following, more questions and answers will be added soon.