(2a)
(i) Raw materials for industries: Through ports, raw materials are imported for industries.
(ii) Tourism: Seaports are also centres of Tourist attraction
(iii) Export of goods: Goods produced in Nigeria are exported to other countries through seaport
(iv) Import of goods: Goods produced in other countries are brought into the country through the Seaports. 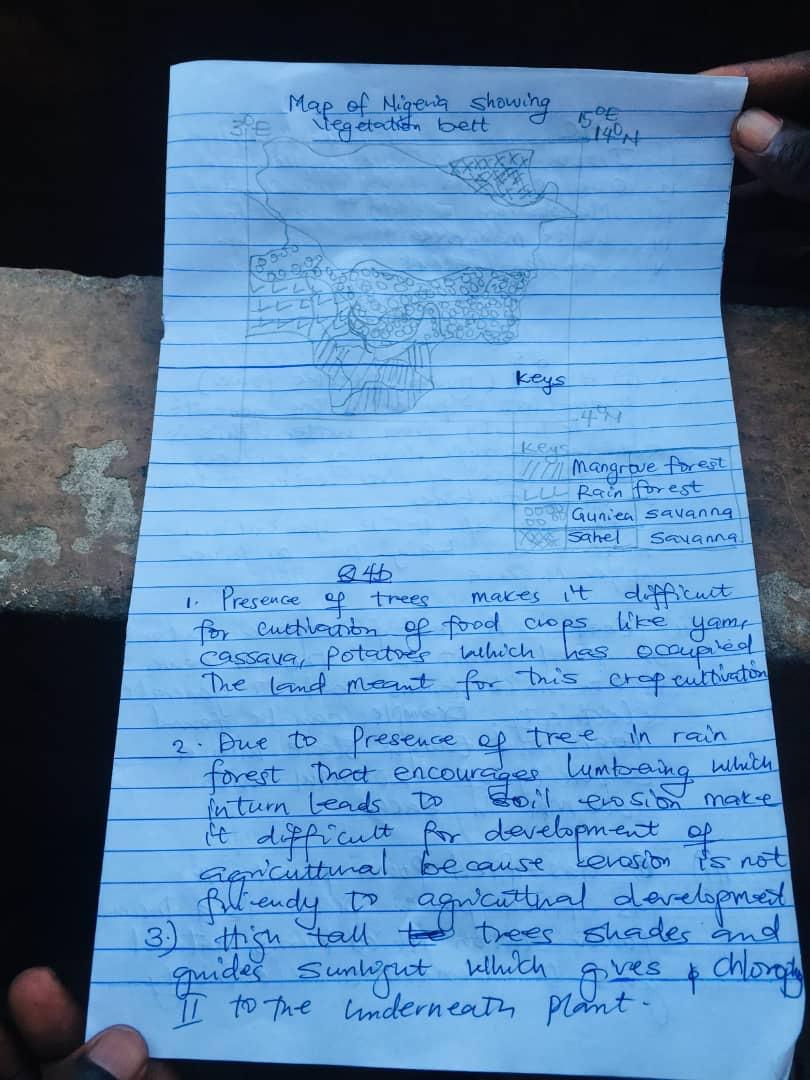 (4b)
(i) Presence of trees makes it difficult for cultivation of food corps like yam, cassava, potatoes which has occupied the meant for this crop cultivation
(ii) Due to presence of tree in rain forest tract encourages lunbreing which in turn leads to soil erosion make it difficult for development of agricultural because erosion is not friendly to agricultural development
(iii) High tall tree shades and guide sunlight which gives chlorophy II to the underneath plant

(5a)
(i) H.E.P. (hydro electric power) hydro electric power is the generation of electricity from water. This is achieved through damming of rivers and the use of river water to turn or drive turbines. Example of H.E.P generation in Nigeria is kainji dam on river Niger Nigeria
(ii) Coal: A coal fired power station or coal plant is a thermal power station which burns coal to generate electricity, Example can be found in kogi and Enugu State with a capacity of 2000MW with 1000mw in each.
(iii) Gas fired power plant: A gas fired plant is a thermal power station which burns natural gas to generate electricity. Example can be located in Calabar with 561MW, Egbema power plant in Imo state with 338MW and Egbin thermal power station location in Egbin with 1320MW

(5c)
(i) Proper funding to the generation of power supply in Nigeria by adding good amount of money during budgeting
(ii) There should be adequate and proper skilled labour that can handle and execute power generation in terms of technology. Government should train his personnel technology known how

(6a)
(i) Increase in Gross national product: Industrial sector through its operations like paying of taxes,increases the earnings accruing to the country
(ii) Diversification of the economy: Industries help to prevent over dependence on only one product
(iii) Infrastructural development: The establishment of an industry in a place stimulate the development of infrastructures roads, pipeborne water, electricity and so on