If you’re looking for the cheapest universities in Singapore for international students, you’ve come to the right place. There’s no need to look any farther; you’ve arrived at the perfect location.

Singapore is well-known for its stellar reputation, entrepreneurial energy, and world-class development. It is known as the world’s ‘garden city’ because of the amazing mix between its own culture and globalized western modernism. It is one of the fastest-growing countries on the planet.

In this post, we’ll give you a list of the cheapest universities in Singapore for international students, as well as a breakdown of whether studying in this well-known country is genuinely expensive or not.

The National University of Singapore (NUS) was established in 1905, making it the country’s oldest higher education institution. It is also the most populous in terms of the student population, with over 40,000 students, and is widely regarded as Singapore’s best.

The University of Singapore is organized into 17 schools and faculties. Business, medicine, public policy, the arts, and social sciences, design and the environment, music, law, integrative sciences and engineering, public health, computing, dentistry, and science are among the fields where these are offered.

This low-cost institution in Singapore also offers programs in collaboration with universities throughout the world, such as a medical school with Duke University, a liberal arts college with Yale University, and a research and technology partnership with MIT.

There are numerous student houses and halls at NUS. Over 6,000 pupils can be accommodated in these facilities. There are four residential colleges within the institution, with a total of 5,100 students and researchers.

Singapore had had one institution for a long time until the Nanyang Technological University (NTU) was founded in 1981. With roughly 33,000 students, this is Singapore’s second-largest university and is frequently regarded as the country’s second-best higher education institution.

On three separate campuses, NTU is divided into many schools, colleges, and research centers. Medicine, humanities, arts, social sciences, business, science, and engineering, as well as education, are among these fields. To see which undergraduate programs are available, go here.

This low-cost institution in Singapore also includes student housing for over 14,000 students. 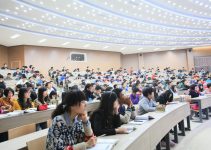