The aim of the Unified Tertiary Matriculation Examination (UTME) syllabus in Mathematics is to
prepare the candidates for the Board’s examination. It is designed to test the achievement of the
course objectives, which are to:

SECTION I: NUMBER AND
NUMERATION.
1. Number bases:
(a) operations in different number bases
from 2 to 10;
(b) conversion from one base to another
including fractional parts.
2. Fractions, Decimals, Approximations
and Percentages:
(a) fractions and decimals
(b) significant figures
(c) decimal places
(d) percentage errors
(e) simple interest
(f) profit and loss per cent
(g) ratio, proportion and rate
3. Indices, Logarithms and Surds:
(a) laws of indices
(b) standard form
(c) laws of logarithm
(d) logarithm of any positive number to a
given base.
(e) change of bases in logarithm and
application.
Candidates should be able to:
i. perform four basic operations (x,+,-,÷);
ii. convert one base to another.
Candidates should be able to:
i. perform basic operations;
(x,+,-,÷) on fractions and decimals;
ii. express to specified number of significant
figures and decimal places;
iii. calculate simple interest, profit and loss per cent,
ratio proportion and rate.
Candidates should be able to:
i. apply the laws of indices in calculation;
ii. establish the relationship between indices and
logarithms in solving problems;
iii. solve problems in different bases in logarithms.
iv. simplify and rationalize surds;
v. perform basic operations on surds

(f) relationship between indices and
logarithm
(g) surds
4. Sets:
(a) types of sets
(b) algebra of sets
(c) venn diagrams and their applications.
SECTION II: ALGEBRA
1. Polynomials:
(a) change of subject of formula
(b) factor and remainder theorems
(c) factorization of polynomials of degree not
exceeding 3.
(d) multiplication and division of polynomials
(e) roots of polynomials not exceeding degree 3
(f) simultaneous equations including one linear,
one quadratic
(g) graphs of polynomials of degree not greater
than 3
2. Variation:
(a) direct
(b) inverse
(c) joint
(d) partial
(e) percentage increase and decrease.
3. Inequalities:
(a) analytical and graphical solutions of linear
inequalities.
(b) quadratic inequalities with integral roots
only.
4. Progression:
(a) nth term of a progression
(b) sum of A. P. and G. P.
5. Binary Operations:
(a) properties of closure, commutativity,
associativity and distributivity.
(b) identity and inverse elements.
Candidates should be able to:
i. identify types of sets, i.e empty, universal,
compliments, subsets, finite, infinite and disjoint
sets;
ii. solve set problems using symbol;
iii. use venn diagrams to solve problems involving
not more than 3 sets.
Candidates should be able to:
i. find the subject of the formula of a given
equation;
ii. apply factor and remainder theorem to factorize
a given expression;
iii. multiply and divide polynomials of degree not
more than 3;
iv. factorize by regrouping difference of two
squares, perfect squares, etc.;
v. solve simultaneous equations – one linear, one
quadratic;
vi. interpret graphs of polynomials including
application to maximum and minimum values.
Candidates should be able to:
i. solve problems involving direct, inverse, joint
and partial variations;
ii. solve problems on percentage increase and
decrease in variation.

See also  How to Check Admission in Dominican University

SECTION III: GEOMETRIC AND
TRIGONOMETRY
1. Euclidean Geometry:
(a) angles and lines
(b) polygon; triangles,
quadrilaterals and general
polygon.
(c) circles, angle properties, cyclic,
quadrilaterals and intersecting
chords.
(d) construction.
2. Mensuration:
(a) lengths and areas of plane geometrical
figures.
(b) length s of arcs and chords of a circle.
(c) areas of sectors and segments of circles.
(d) surface areas and volumes of simple
solids and composite figures.
(e) the earth as a sphere, longitudes and
latitudes
3. Loci:
locus in 2 dimensions based on geometric
principles relating to lines and curves.
4. Coordinate Geometry:
(a) midpoint and gradient of a line
segment.
(b) distance between two points.
(c) parallel and perpendicular lines
(d) equations of straight lines.
Candidates should be able to:
i. perform basic operations (x,+,-,÷) on matrices;
ii. calculate determinants;
iii. compute inverses of 2 x 2 matrices
Candidates should be able to:

iv. determine the distance between two points on
the earth’s surface.
Candidates should be able to:
identify and interpret loci relating to parallel
lines, perpendicular bisectors, angle bisectors
and circles.
Candidates should be able to:
i. determine the midpoint and gradient of a line
segment;
ii. find distance between two points;
iii. identify conditions for parallelism and
perpendicularity;
iv. find the equation of a line in the two-point
form, point-slope form, slope intercept form
and the general form.

5.Trigonometry:
(a) trigonometric ratios of angels.
(b) angles of elevation and depression
and bearing.
(c) areas and solutions of triangle
(d) graphs of sine and cosine
(e) sine and cosine formulae.

See also  How to Check Admission in Elizade University, Ilara-Moki 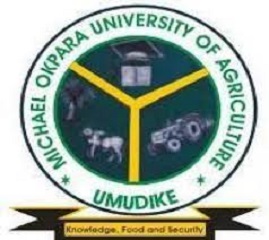